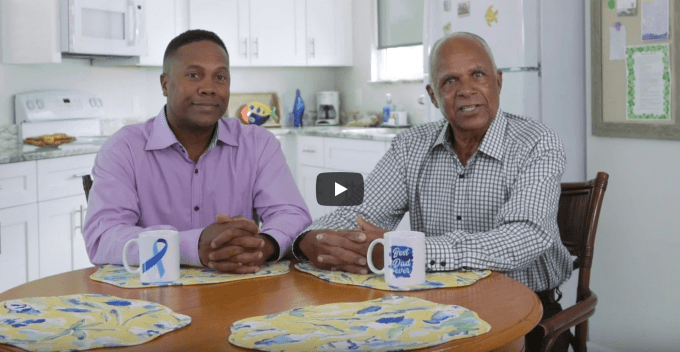 To those familiar with COMPPARE, the face of Calvin Minor is an evergreen fixture for the study’s introduction to patients and advocates. As co-star of COMPPARE’s recruitment video with his son Tarik (both shown right), Calvin, a COMPPARE Patient Stakeholder, is a committed advocate who believes in the work of the study’s team. And if you ask Calvin, he will tell you that his focus on COMPPARE’s success goes beyond his role in the study’s video.

“It’s important to me that we reach as many men as possible to make them aware of this work,” explained Calvin. “Anything I can do to advance the treatment of prostate cancer is an easy ask for me to be involved.”

Shortly after his retirement from Xerox, Calvin was diagnosed with prostate cancer. He had always considered himself to be very attentive to his health, with annual physicals and in-depth conversations on men’s health with his doctor and other preventive measures. For 40 years Calvin enjoyed a great relationship with his doctor, who gave good advice, prescribed the right medications, returned his calls and was timely in his decisions. Unfortunately, for all of his efforts, Calvin had to face his own prostate cancer diagnosis.

“I learned during an office visit that my PSA had escalated,” said Calvin. “I realized, just when you think you don’t have cancer, you do.”

Fortunately, through successful treatment, Calvin’s cancer has been “zero detectable” for ten years. He uses his professional skills connected with his cancer experience to advocate for prevention and better treatment of prostate cancer. The COMPPARE video is a great example of his commitment to advocacy. Prior to his participation in the video, his son Tarik (a local Jacksonville news anchor) shared Calvin’s prostate cancer survivor experience with COMPPARE team members. Because of his story, Calvin was then asked to participate in the video with Tarik. He jumped at the chance, and the COMPPARE recruitment video was born.

Calvin was born in Bowling Green, Virginia, a small-town north of Richmond. Both of his parents died from cancer: His mother, at the age of 70 from breast cancer; and his father, at 80, from prostate cancer. Their experiences with cancer gave Calvin the foresight to prepare himself for his own experience.

Calvin graduated from Virginia Union University, Richmond, VA with a Bachelor of Art degree in Secondary Education (Math concentration). He pursued his graduate studies in Administration and Supervision at Richmond Polytechnic Institute, Richmond VA. He Joined the Richmond Public Schools System as a teacher in math and science, and a Title I School Community Coordinator. He was also a math teacher at Lake Braddock Secondary School Fairfax County VA. A proud member of the Alpha Phi Omega fraternity, Calvin served in the US Army’s Military District of the Washington Army Corps of Engineers, Defense Mapping Agency, Washington, DC. He retired after 25 years with Xerox Corporation as Senior Sales Executive.

Married 51 years to wife Veronica, they have two children, Tarik and Kandice. Calvin believes his personal and professional engagements have motivated him to assist in building a better life for others.

“There are paths to better outcomes for prostate cancer treatment,” he concludes. “I believe the work of COMPPARE will help us get there.”